Value of wildlife in Nebraska 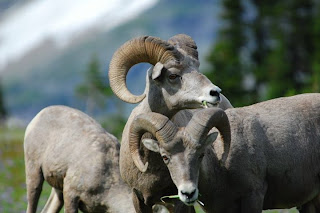 If there was any doubt that wildlife have direct, economic value to the state of Nebraska, that question has been laid to rest. A German hunter, this past weekend, paid $117,500 for the winning bid in an auction (in Las Vegas, where else?!) for the rights to a bighorn sheep hunt in western Nebraska.
Nebraska's bighorn sheep population currently sits at about 250-300 individuals. Only two permits are awarded, most years--no permits were given out last year. One permit is awarded at auction, and another is drawn in lottery-fashion for a Nebraska resident. Both winners receive lodging and guiding as part of the hunt package.
The money raised by the auction is used, by Nebraska Game and Parks Commission, to improve bighorn sheep habitat.
I think this is great. It helps the public see that wildlife and our ecosystems can be valued directly, and may help them understand (eventually) the indirect values of the same ecosystems (e.g., wetlands help clense drinking water for cities). I hope we eventually get beyond the status of only seeing value in huntable/watchable wildlife...but that's another blog for another day.
There are complicated issues regarding valuation of wildlife. The biggest problem is that wildlife in Nebraska belong to Nebraskans-at-large (the entire state)--this applies to all states in the USA. So, when Game and Parks receives the money and uses it in the state for conservation, that makes sense to most people. Some people have a problem with individuals benefiting from wildlife on their farm/ranch--a public resource on private land. But, those same farmers/ranchers are also the ones who spend time and money to manage the habitat to support 'our' wildlife. Seems fair, to me, to give them a little kick-back for their efforts--to keep them engaged in conservation.
If you want to read more about this, I'll post a self-serving link to a small booklet that I wrote, called "Farming with Wildlife". It explains how this works in Namibia, a country in southern Africa.
Just for comparison, the hunt for a bighorn sheep in Nebraska brought in more money than it costs to purchase a black rhino in Namibia (which often sell for $50-75,000). Hunts of black rhino go for twice the cost of a sheep hunt: about $250,000. Imagine what a group of private landowners could do, for conservation, with a similar amount of money!
-------------
Personal photo of bighorn sheep in Glacier National Park, 2010.
Posted by Larkin Powell at 7:53 AM