Here's an interesting article from the NY Times about Powerpoint (Microsoft's wonderful/evil software program) and briefings in the US military.

Teachers have somehow joined the Powerpoint joy-ride, even though we know Powerpoint lectures, for the most part, are simply horrid. It's kind of like an artist who knows that paint-by-number is bad, but decides it's the easiest way to work. And, besides, all their friends are doing it. Funny thing is that we (teachers) complain about students' lack of creativity and critical thinking...but if you look back at our students' academic careers, they are mostly a 4-year set of powerpoints. Acckkk!

There is no doubt that Powerpoint stiffles discussion in class. If the "three effects of X on Z" are already typed out as bullet points on the screen, there's no need to ask students to generate those three effects during class. And, discussion takes too long, anyway...gotta get through lots of material, right?! I've tried reverting back to my days of teaching with 'overheads' by just using Powerpoint to display images (it is really good for that), while writing all lists/notes on the whiteboard while talking with students. My year in Namibia reminded me that I still knew how to teach without a Powerpoint presentation (photo below). A fun test for any teacher...pretend the projector bulb died! What would you do?! 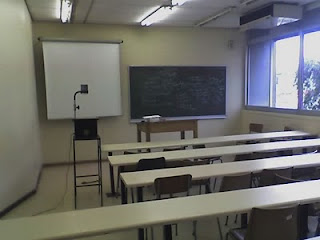 In related news, instructors are increasingly becoming worried about students playing around on laptops in their classroom (after, of course, encouraging students to purchase laptops to bring to our classrooms!). Perhaps if we created lectures/discussions which 'made' them take notes, and didn't place all of our thoughts on bulleted lists, they would be writing (or even typing our notes) instead of emailing/Facebooking friends?!

Finally, it is interesting to think about wildlife management and Powerpoint. Perhaps the article about the Pentagon briefings has it dead-on...if we think an issue can be simplified to a linear set of bullet points, it's no wonder we can't get stakeholders to understand the complexities of ecological systems and management decisions. I think it's time to abandon the bullet points.

This isn't simply a matter of 'electronic' versus 'paper' or 'blackboards'. It is very possible to use computer software (including Powerpoint) to record discussions during a meeting or in class. But, you've got to get out of the "canned show" mode and interact.
Posted by Larkin Powell at 7:24 AM