Each spring semester I tell my students, toward the end of my Wildlife Ecology and Management course, that it is somewhat ironic that 100 senators can have more impact on conservation than 1,000 wildlife biologists.  It's because of the Farm Bill.

I still believe my statement.  The Farm Bill creates habitat and changes land use decisions very effectively.  Through the Farm Bill, land is placed back into quasi-native vegetation to reduce impacts of soil erosion and reduce the acreage in crop production (originally intended to reduce the over-supply of crops on the market and bolster corn, cotton, and wheat prices).  Along the way, wildlife habitat became an important impact of the Farm Bill.

My own research lab has shown that you can double production of pheasants in a landscape with properly managed CRP grasslands--an definite impact of the Farm Bill on wildlife.  We've also shown benefits for prairie-chickens--if you are worried about native species!

And so, wildlife biologists at the state and federal level have begun to see the Farm Bill as the Holy Grail.  Our saviour, come to bring cropland back to grassland!  We train cohorts of 'private lands biologists' and even nickname them "Farm Bill biologists".  They do very good things--and work tirelessly with landowners to develop management plans that can produce the results that our research predicts.

Today's Lincoln Journal-Star provides a hint to the complexities of putting all of our private land energy into the Farm Bill basket.  Higher grain prices are changing minds of farmers, and land is coming out of the Farm Bill programs--back into corn.  It's a trend that concerns those Farm Bill biologists who thought they had created landscapes that could support wildlife again.

I would argue that it is time to start thinking about other, or additional, models of private lands conservation.  Let's look at the relative risk of betting conservation on corn prices.  Farmers are well-aware of how much grain prices fluctuate, but I'm not sure conservation-minded wildlife biologists follow corn futures.  The figure below shows the history of corn prices in the US.  The Farm Bill, as such, was passed in 1985.  Look at the volatility of corn prices since that year!  We appear to have now entered a new plateau of prices, in which conservation will cost more--to compete with corn prices for the same parcel of land. 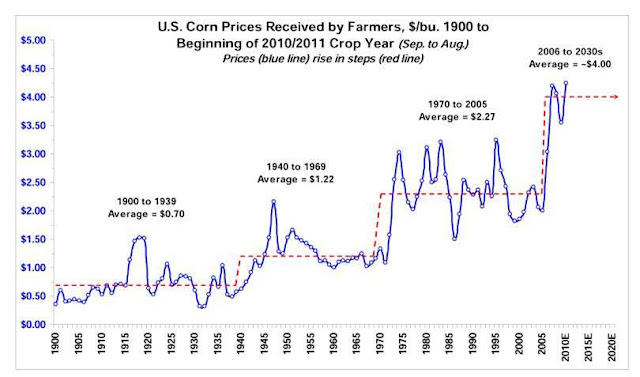 For further comparison, we always talk about the 'volatility of tech stocks'.  Well, here's the history of the NASDAQ during recent years.  Except for a couple of really risky periods, I think I might rather bet on the NASDAQ than corn, if push came to shove... 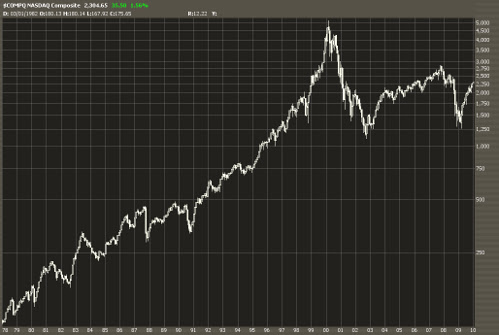 So, back to my message to my students.  Am I still convinced that 100 senators can impact wildlife conservation?  Yes, I think they can.  But, I'm more and more convinced that wildlife biologists are needed to find new ways to do conservation---that go beyond the Farm Bill.


The farmer interviewed for the Lincoln Journal-Star article sums his decision up nicely: "No doubt about it.  It's the crop prices that are a definite incentive to raising corn, rather than CRP."  His concern is his family's livelihood, as anyone would expect.
Back to my research project--the one that showed that a landscape with many acres of well-managed CRP could produce the heck out of pheasants.  The follow-up to the story is this:  5 years after we concluded that research project, only 10% of the farmground, from our set of research site, remains in CRP.  Corn prices swayed the minds of 90% of the landowners to switch back to corn and beans.  Quite the legacy, eh?  It's my own fault--I bet on corn to save grassland birds.
Today's newspaper article, to stay positive, does suggest that many landowners are signing up during the new Farm Bill sign-up period--to replace the ones who are opting out.  Time will tell whether it's an exact replacement of acreage.  But, even if the number of acres are replaced in a county, the landscape has shifted.  Acres here are replaced by acres there.  Will the pheasants and quail find the new acres?  Some probably will.  But, it's not a long-term, sustainable change.
My opinion---it's time for a new model for our approach to private lands conservation.  One that is a little less risky that betting on corn futures.  I'd be happy to hear your opinion!
Posted by Larkin Powell at 8:28 AM