I will not stop for petrol in Uis

I will not stop for petrol in Uis.

Uis ("wees"), Namibia is an old mining town with one petrol station.

Uis has its tin mine and it has the fact that 13 soccer players, traveling through, were buried in its cemetery after using a poisonous plant to stoke their camp fire.


And, while I feel sorry for the 13 boys who had one last ill-fated night under the moonlit Namibian sky, I feel most for the grave digger who was told to dig 13 graves in the rocky soil that is Uis.  Thirteen graves is more than his annual average, I am sure, and finding 13 spots where you can dig deep without hitting bedrock must have seem an impossibility.
Beyond the mine and the graves, Uis is mostly known for being a town with a petrol station, because no matter where you start from, or where you are going, you will have to stop for petrol in Uis.
It is a geographical phenomenon. 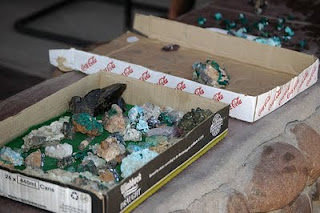 When you stop for petrol, you car is immediately surrounded by guys with crystals from the nearby Brandberg.  Tourmaline, amethyst, smoky quartz.  Citrine and fluorite.  The crystals are the size of peanuts and golf balls, and they are bunched on cardboard or styrofoam display trays, covered in dust.
"Sir the mine is closed.  You must buy so we can have bread."
"Sir, you bought from him.  I am hungry, too."
In your face.  Arms through the window that you left down a split second too long.

Ironically, the stones are actually pretty and they catch the sun in magical ways.  You might have considered buying if the guys didn't descend on you like a butterfly finding the last dew drop in a desert.  Tourists, it seems, are a valuable resource.

"Sir, maybe two small stones so I can feed my daughter?"

The guy pumping petrol appears to be in on the push, because he is taking way too long to fill my tank!

"Sir, do you have coins for me?  I will tell you a funny story?"

Odd, but somehow it is hard to think you might laugh after this assault on your sanity, but it turns out to not be a problem---his story is not funny.   But, it earns him coins.  His gambit, that you will eventually give in, pays off.  The fact that a bad joke is more appealing than the rocks they are selling says something about their marketing strategy.

And so, I tell myself, I will not stop for petrol in Uis.  Never again.

I will fill up at the last possible town before Uis, or I will risk running empty as I go past Uis at 80 km/hr.

The next town offers protection.  Petrol stations where the owners have security to keep the pumps clear of these guys.  Protection that balances the risk of running out of petrol in the desert by skipping Uis.

Protection.  So that I can ignore them and their hunger.  So I don't have to decide whose story is the saddest or who is just a con man.  So I can concentrate on my trip, and get out to purchase a Coke without being mobbed.

"Sir, can you also buy me bread when you go in the store?"

There is no need to call me "Sir" while I am ignoring you.  I am not going to stop to buy petrol in Uis.


30 May 2011
L. Powell, in Windhoek (realizing it is fine to be uncomfortable at having successfully skipped the petrol station in Uis; sometimes, you just have to allow yourself to feel uncomfortable, I think)
Posted by Larkin Powell at 6:14 AM