Five days to build a city of 1 million?

My probably-most-favorite columnist, Alan Guebert, is at it again.  Today's topic: linking the need to feed the world with our current farm policy.  Need versus action.  And, "actions speak louder than words" as all grandmothers and mothers like to tell us. 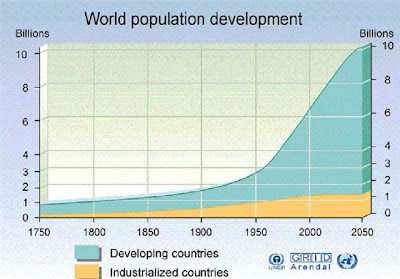 Guebert quotes the recently-released report from the United Nations, "Food and Agriculture: the future of sustainability": "Our current population trajectory means that from now to 2030, the world will need to build the equivalent of a city of one million people in developing countries every five days."

Yikes.  Maybe ABC needs to develop Extreme Makeover: City Addition!  I am not sure even Ty Pennington could pull this one off.

Guebert tosses out some statistics: taxpayers can expect to pay $7.8 billion, per  year, for crop insurance subsidies through 2016.  In the past 15 years, taxpayers have paid $11.2 billion, per year, for direct subsidy payments to grain and cotton farmers (payments designed to take land out of production). Agriculture uses 80% of water used each day.  And, Guebert questions whether this set of payments supply the food and water that these 'new cities' will need.

In some ways, there is nothing new here: we have been warned about exponential human population growth for a long time--but, we are now in that part of the growth-curve where things really start to happen.  And, our farm policy has gotten incredibly complex and dominated by agribusiness interests.  We know that.

Conservation, of course, is caught in the midst of this dynamic.  We (conservation-minded folks) have generally been supportive of ag subsidies that result in more native vegetation and fewer crop fields.  Does that make sense, now?  And, any community ecologist can tell you that when the size of the population of one species increases (i.e., above figure), resources are going to be limited for other species.   Get ready for the IUCN Red List of threatened and endangered species on the planet to grow.

So, Guebert makes a good point in his column--we have some big choices as a society, in the US, as to the kind of agriculture policies that we are going to employ.  But, Guebert does not mention the elephant in the room--population size.  If population size did not increase, as projected, we wouldn't have to build those cities and feed those people.

As hard as the questions about ag policy may be, questions about controlling human population size appear to be even harder to talk about.  Birth control  and pregnancy planning are topics that are directly related to levels of education, economic distribution, and empowerment of women to make choices (that is why the "developing" county and "industrialized" country graphs have different population trends in the figure, above).

It is hard to imagine our current set of politicians, in the US, sitting down to have any meaningful conversation about these topics.  It is hard enough to have the conversation in a local coffee shop.

So, Ty, I think it is time to start gathering your power tools.  Better include some old-fashioned hand tools, as well.  There may not be electricity where you're going.
Posted by Larkin Powell at 9:41 AM