Civil war and the cattle industry 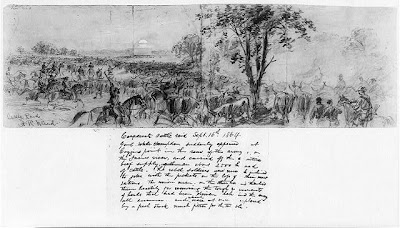 I am digging around in the Library of Congress collections this week, and found this line drawing. It was published in Harper's Weekly in 1864. Interested in how this relates to wildlife? Read on.

Before the Civil War, most Americans did not eat beef. The carcass was too large to eat, without refrigeration, and most folks thought it tasted odd. Game animals and hogs were the staple of most farms. But, the Civil War required massive amounts of food for large armies. The beef industry was born, and this document clearly shows the magnitude of the herds that were driven with the army.

As the Civil War ended, the Homestead Act had been established. The move west was on, and cattle soon replaced bison on the Plains. There were many reasons for the downfall of bison, but competition with domestic cattle was certainly one driver, albeit a minor one perhaps, in the push to clear the Plains of bison.

The notes below this drawing are also intriguing. They describe the chore of bringing along the beef:

"Confederate cattle raid Sept. 16th 1864. Genl. Wade Hampden [sic] suddenly appeared at Coggins point in the rear of the army, on the James river, and carried off the entire beef supply, about 2500 head of cattle. The rebel soldiers were much inclined to joke with the pickets on the loss of their meat rations; the Union men, on the other hand, thanked them heartily for removing the tough remnants of herds that had been driven behind the army all summer and which were at once replaced by a fresh stock much fitter for the table."

This is why I am addicted to archives...
Posted by Larkin Powell at 7:43 AM