Downturn in the ag economy: Trump and the 2018 Farm Bill

If you are a member of the ag community, your head must be spinning--and for good reason. The President you helped to elect is eliminating trade deals that benefit you, while the ag economy stumbles. Layer on top of these dynamics the divisive Congress in DC, and hopes for a timely 2018 Farm Bill appear slim.

In 2015, I published an essay on the impending bust in the ag economy, in which I suggested planners should begin to think about the 2018 Farm Bill as an opportunity for an innovative direction for conservation on farm lands. I wrote: "History shows that political will and innovation come together during times of economic crisis to shape the future of conservation."

Since writing that piece, I've honestly been amazed at the trepidation of the ag community to admit that a bust in the ag economy was on the horizon. You can see this hesitation in the descriptions offered by many (except for farmers directly involved) in this recent piece by Harvest Public Media. However, this week, the Wall Street Journal (a non-ag publication) finally declared that the bust is here. Why the hesitation to talk about impending economic woes? Is it a function of the typical optimism of farmers?  Is it a function of the PR machine of agri-industry that has a vested interest to encourage large-scale production of low-price corn and beans?  Or, is it simply a human tendency to hide your eyes before a crisis occurs?

Trepidation or not, the bust is occurring, and we have to talk about it. We have to plan for it. 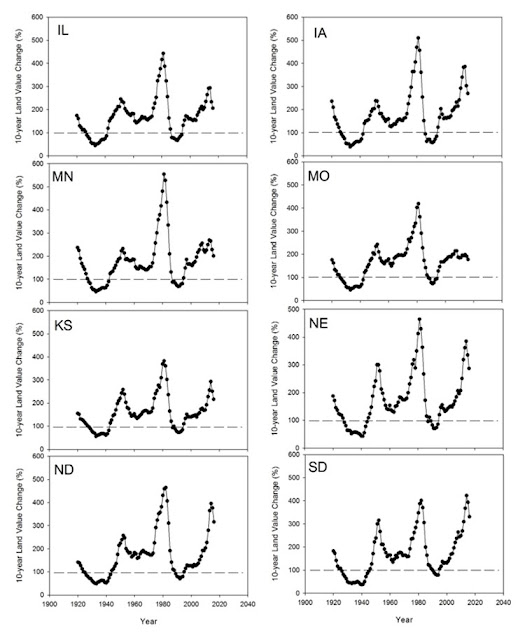 I've updated the figure on land values from that journal article to post it here.  The trends for states in the Great Plains and Midwest illustrate changes in my metric for assessing booms and busts--comparing current land values to land values 10 years ago.  The use of this metric clearly shows past booms and busts, and 2013 was the peak for most states.  The question now is...when will the slide towards the bottom of the trough stop?

Stay tuned.  I'm sure President Trump will have a chaotic effect on events in the next few months, but I'll predict that political will to support the ag economy may surface, just in time for the mid-term elections!  When do those occur? 2018.

Posted by Larkin Powell at 9:03 AM