I'm spending the week at the Congress of the International Union of Game Biologists, meeting in Barclona, Spain.  I won't complain about the setting of this meeting--it is a great town--but, there are problems that arise when you attend meetings like this.  You get too many ideas to ever actually work on them.  And, you tend to get 'data set envy' when you see presentations from countries around the world.

I encountered such envy when I saw Nicholas Aebischer present a plenary talk about the Game and Wildlife Conservation Trust's long-term data sets of several species of pheasant-like game birds in the UK.  I will start by noting that my colleagues and I are excited if we can access data that goes back to 1966 (Breeding Bird Survey) or 1955 (Nebraska Rural Mail Carrier Survey).  In one case, I've worked with data from the Agriculture Statistics Service that went back to 1866...a record of crops planted in Nebraska. 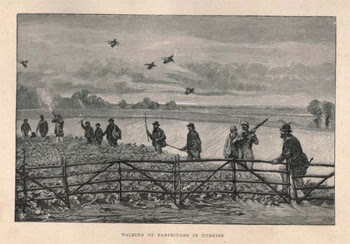 But, the GWCT in the UK has a 'bag record' (an index of the population from hunter harvests--the 'bag' counts from hunts like the one in the print at right) of grey partridge that reaches back to 1826.  Wow.  1826!  That's a long-term wildlife data set...!

Because it is a hunter-bag count, the numbers reflect two things--the number of hunters (and their success) and the number of birds.  The Trust explains the trends on their website as follows (all images are also from their web site):

"Gray partridge bags form the longest series in the NGC. We were able to produce trends in annual bag density that started in 1826, when Darwin was only 17 years old. There are large annual fluctuations, most probably linked to weather. Indeed, the collapse of bags in 1869 corresponds to the coldest year on record since 1740. Despite large swings from year to year, the underlying pattern (green line) charts the rise in popularity of this gamebird during the first half of the 19th century and its heyday during the second half of that century up to the First World War. The high average bags reflect the high densities arising from the extensive mixed agriculture that developed especially after the repeal of the Corn Laws in 1846, the ruthless elimination of predators by private gamekeepers and improvements in shotgun design. Partridge bags remained high until the Second World War, but declined thereafter, especially after the introduction of herbicides and the increase in agricultural mechanisation in the 1950s and 1960s. The BTO index (inset) starts in 1966, and catches the tail end of the decline."


When we look at our declines of wildlife populations in the US--from records that start in the 50's or 60's (like the period of time in the inset on the figure above)--we always wonder "what did populations look like prior to the 50's and 60's?  How much change had they seen prior to when we started keeping records?"  I would guess that some species in Nebraska would mirror the partridge trends from the UK--because our Nebraska agriculture was following a similar pattern at the same time.  But, it's just a guess---because the data doesn't exist.
Posted by Larkin Powell at 12:18 PM