Our view is blocked: an evolutionary response? 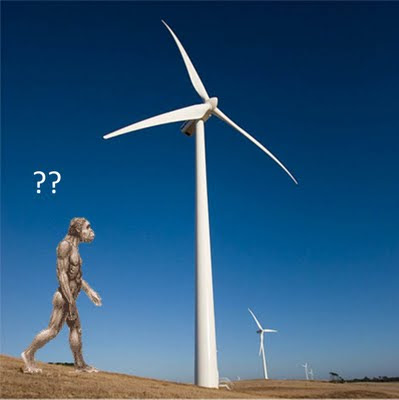 I’m sitting in my hotel in Barcelona and, of course, I did not receive a room overlooking the Mediterranean.   Instead my room looks up at the hills surrounding the city.   I’m not sure I’ve ever been given the prime room in a hotel, but in this case I would probably rather gaze at the greenery.  The hills are beautiful and rolling, and they remind me a bit of the small mountains that surrounded our family when we lived in Windhoek, Namibia.


On the top of each of Barcelona's hills is a bizarre collection of towers which appear to host receivers and transmitters for radar, cell phones, as well as radio and television communication.  Of course, my first response was: “They’ve ruined a perfectly good hill.”
Why is that?  Why do we have a knee-jerk reaction to landscape alteration when it blocks our view?
The more I thought about this, the more it intrigued me.  We, as humans, don’t react much when a prairie is plowed and fragmented by farming—that is progress and it feeds the world.  We don’t react strongly when we know that our neighbor is dumping oil or chemicals in his backyard—even though it might reach the groundwater.   It’s his backyard, and he can do what he wants.

I grew up on a farm in southern Iowa.  If you want to send your neighbors talking, put a new shed on a hilltop.  Or, better yet, tear down a barn that has always been there.  Or, plant your crops in strips (as my father did) rather than in big blankets of boredom.  Do something to change the way the neighborhood ‘looks’ and you might get a comment the next time you’re in the farm-and-home store.  At the least, people will drive by your place slowly.

This interests me, because I’ve been thinking for the past couple of years about wind energy.  Our lab may become involved in research on how wind energy affects prairie-chicken populations—there is concern that placement of towers in Nebraska’s  contiguous grasslands could disrupt movements, affect choice of nesting locations, or affect survival of adults.  Again, interesting—we should probably be more concerned about timing of haying that affects chicks and their bullsnake predators.  Or, we might choose to be wary of the ever-slow encroachment of cedar trees that provide cover for predators.  But, those things are not visual, or they happen so slowly that we don’t realize it is happening.  But, a wind turbine is something to get excited about.


Why do we shy away from wind turbines?   I’m starting to think that it is mostly all about our view.  They are going to change the way that our grass-scapes look, and we don’t like that.  Something bugs us.
Think about it—you are driving down the interstate (pick Iowa as a place for this thought-story: they just installed a lot of turbines along I-80 in western Iowa).  You come over the hill, and suddenly the landscape is populated with turbines as far as you can see.   Many people’s reaction to this is to make some comment to the effect of: “That has just cluttered up things, hasn't it?”


We have this aversion to our view being blocked.  Never mind the fact that you are driving in the middle of a pack of 6 semi-trucks and 18 cars who can’t decide who is going to go first and who can’t get their cruise control set at a constant speed.  No, it’s the wind turbines that disgruntle us.  The real risk of danger to our lives is the cars around us, but our gut responds to the change in the viewscape.
I’ll hazard a guess that humans are hard-wired, through evolutionary time, to respond to changes in our viewscape.  We know that our eyes are one of our most important senses, and we pick up on visual cues pretty quickly, compared to other mammals (even I can hide from a deer in an open field if I stand still).  For our cave-man Homo ancestors, and Australopithecus before them, a change in the viewscape probably was the best cue to be on your guard for predators or competitors.


So, it probably stands to reason that we are uncomfortable at the notion of our landscape being altered by big towers with blades on them.  The question is—is the cue a false cue?  Or, should we listen to our gut?  I’m still wondering, as I look at the hills of Barcelona.
-------------------
Note: I created the conglomeration imagery above.  My apologies to their original owners.
Posted by Larkin Powell at 6:39 AM