Is freezer space a limiting factor for deer control in Nebraska?

This morning's newspaper announced a new program from Nebraska Game and Parks Commission to address deer populations in Nebraska.  The previous earn-a-buck program is out.  The River Corridor plan is in. 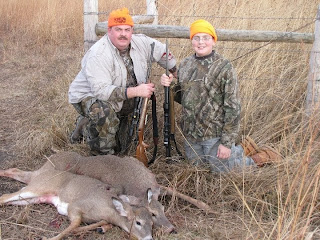 Earn-a-buck required hunters in certain hunting districts to take an anterless deer (hopefully female) before shooting a buck.  The goal was to remove the population's reproductive 'engine'.  The new program also targets antlerless deer, and provides incredibly cheap licenses for long periods of time along river corridors in Nebraska.

The problem with the Earn-a-buck program was that people grumbled about it (although we Nebraskas didn't grumble as much as Earn-a-buck'ers in other states have grumbled).  And, most critically, it took effort to enforce.  There are stories of the same doe making the rounds to the check-in stations for multiple hunters--which led to tactics of making cuts on ears and such, just to make sure each doe was a fresh one.  Point: Earn-a-buck required extra law enforcement effort.

Second Point: Earn-a-buck did not help the effort to get more  hunters in the woods.

My students in Wildlife Ecology and Management learn about population regulation, and there are two things required for a predator to regulate (dependably curtail rising numbers) a prey population.  Classic ecology:  first, there must be a numeric response to increases in prey.  So, as deer numbers increase, predators (the hunters) must increase in numbers.  Game and Parks has successfully done this, state-wide, through cheaper permits and access programs.  While the number of gamebird hunters is dropping, the number of big game hunters (deer hunters included) is rising.

Statewide is one thing, but damage management has to be concerned with the local level.  The Earn-a-buck program had the potential to frustrate local hunters in regions where numbers of deer really needed to be dropped.

The second factor needed to regulate a prey population is for the predator to increase its kill rate (number of deer taken per year by hunters, in this case).  Normally, wild animals have territorial boundaries and only so many predators can be attracted to a certain area.  And, predators only have so much room in their stomach.  So, there is a limit to the number of deer that a mountain lion can kill in an year.  Same with hunters. We only have so much freezer space.

There have been some interesting proposals by my colleagues to increase the number of deer that a hunter can take in a year, by allowing highly regulated sales of meat.  I support their call, but that proposal has a lot of political opposition.  There are programs to allow easy transfer of meat from hunters to non-hunters and donation to facilities (nursing homes, soup kitchens) that need meat.  Those programs count on hunters taking the extra step (after processing the deer) to donate it.

So, can deer  hunters regulate deer in Nebraska?  The current tactic by Game and Parks appears to be to really hammer on the first factor above:  offering cheap licenses (now down to $11/license for two antlerless deer--that is almost giving them away from free!).  And---the River Plan targets specific areas where deer populations are most problematic and where farmers encounter the most deer damage to crops.

It is possible that cheap licenses may accomplish both goals--more hunters taking to the field and those same hunters making the decision to continue to shoot deer by getting a second, third, or fourth cheap license (or more).

But, we still have only so much room in the freezer.  The big question is--can Game and Parks attract enough hunters to overcome the limitations of our freezer space?  It appears to be working in eastern Nebraska, according to Game and Parks' data.  Stay tuned.
Posted by Larkin Powell at 9:26 AM