Hungry for hunters and anglers? 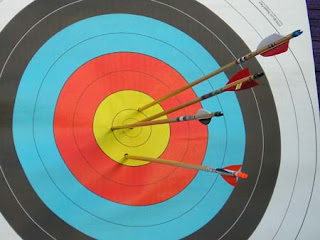 Word on the street (well, in our local newspaper) is that The Hunger Games book series has sparked a massive interest in archery programs across the US.  Kids are signing up for archery leagues in record numbers.

It is hard to tell if our literature reflects society or drives society.  In this case, a book is driving interest in archery.

In the past month, colleagues at the University of Nebraska reported--under headlines aptly constructed as "Where the Wild Things Aren't"--that references and images of nature have been disappearing from children's books since 1938.  This follows the feeding frenzy over the concern of "Nature Deficit Disorder" from Richard Louv.

More evidence that literature is at least tracking our societal trends, and perhaps playing a role in our choice of activities?

State and federal agencies are currently spending millions of dollars to recruit and retain hunters and anglers.  Maybe some of that money could be spent to support authors and screen writers who cleverly wrap hunting and angling into stories in which youth can engage.  It appears they are hungry for it.