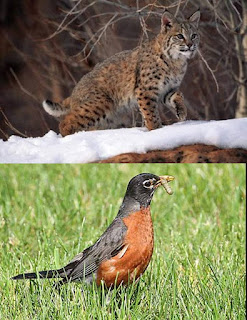 My family has a tradition on April Fools Day that dates back to my grandfather.  The story has it that every April 1st, he would go to the window and exclaim, "Well, there's a robin in the yard!"  The family would run to the window to look, and he would joyfully shout, "April Fools!"  No robin to be seen.

A side note: the low-stakes subject of this April Fools may explain a lot about my heritage (there was no risk of physical harm and no risk of personal embarrassment that often accompanies pranks on April 1).  It doesn't take much to get my family excited?

I remember both my parents making similar annual jokes about robins or other critters in the back yard when I was growing up.  My son is now 14, and his grandfather has routinely called to exact the April Fools joke.  In recent years, the animal of choice has often been a bobcat.  The prank is played out on the phone, so the question goes something like, "I just called to tell you we have a bobcat in the back yard!"  After the desired shock expressed by my son, the April Fools gag has been revealed.  There is no bobcat.

So, it was interesting this morning when Dad called and asked my son if he could believe there was a bobcat in Dad's back yard.  "Yes" is the response that he got from my son.  Although still 'cool' to see one, bobcats are a lot more common in southern Iowa than when I was a kid at home.   So, it is not completely unusual that one might be in the back yard--as reflected in my son's less-than-shocked reaction.  It sounds like my Dad needs to get a new April Fools animal--maybe a unicorn?!  Or, maybe he should pick some southern species expanding its range--an armadillo or perhaps a peccary?

This exchange between my Dad and my son got me thinking about the robin--the focal species of the 'original' April Fools gag played by my grandfather.  Robins are known as the sign that spring is here, even though they often stick around during winter.  But, why in the world would it have been unusual to see a robin in the yard on April 1?  It would have had to have been rare for it to be used for the prank, right?  You wouldn't run to the window and note, with shock in your voice, that there was a house sparrow would you?  It wouldn't make a good prank--no one would run to see it.

Hypothesis #1: climate is changing and March and April are warmer--leading to more robins on April 1 now than in the past.  This turns out to not be the case.  I downloaded average March and April temperatures since 1940 for Lamoni, Iowa (my grandfather's home town).  Mean monthly teamps for March and April are steady during that time period (I ran a linear regression analysis). 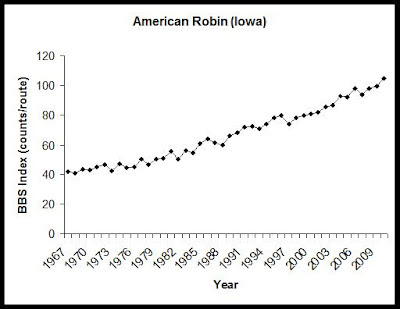 Hypothesis #2: robins are more common.  I downloaded the American Robin data from the Breeding Bird Survey web page, and the trend since 1967 for survey routes in Iowa is shown here.  Sure enough, it is more than twice as likely to spot a robin in your back yard now than it was in 1967 (the earliest year of data for robins in Iowa).

Robins are adaptable birds in urban environments, and there is some evidence to suggest that robin populations decreased prior to the period of the BBS data because of DDT use and DDT levels found in earthworms--a primary food source for robins.  Hence, their relative scarcity in the 1960s made them an excellent candidate for an April Fools prank.  But, their recovery makes them a poor candidate, now.

Just goes to show--a good comedian is forced to change their material every few decades.
Posted by Larkin Powell at 6:43 PM