My Year with Leopold: February

Continuing my year-long Leopold project, and trying to catch up with "real time"...we come to the February installation:

Leopold's February chapter is fraught with symbolism. To heat his weekend cabin, he cuts down the "Good Oak." With its growth rings easily visible, Leopold follows his saw...cutting backwards through the years. The oak has watched over great changes in the landscape and in wildlife populations--and human-kind's interactions with wildlife.

I've traveled to Leopold's "Shack" in Sand County, and I've stood at the spot where the Good Oak grew. There's a plaque to mark the spot...kind of spooky for Aldo-ites who know the story.

I spent the day, today, at the Public Library in Nebraska City. The city served as the launching-off point for ox wagons that serviced the various forts on the Frontier, and people like Morton (salt fame) grew exceedingly rich. Small town now, but it has quite a history.

I was digging through history in the library, much like Leopold was digging through history as he viewed the Oak's stump. I happened upon a real gem: A. J. Leach's "Early Day Stories." Published in 1916, the book relates stories experienced by Leach, who journeyed into Nebraska as a pioneer teenager in 1852. He eventually settled in Antelope County, home of current-day Neligh in eastern north-central Nebraska--in the transition between the Sandhills and the former tallgrass prairies of eastern Nebraska. 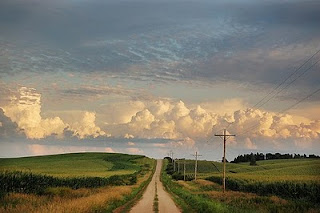 Leach's stories include the wagon train journey with his family in 1852, as well as stories from the 1860's and 70's when he searched for and established his own homestead. As opposed to other accounts that I have read, Leach focused most on wildlife that was around him. At one point, he begs Nebraska schools to teach bird studies to all youth so that they will learn more of their surroundings. Remember he was writing this in 1916!
There is an especially poignant set of paragraphs, where Leach describes the bounty that existed in Antelope County in 1869, as he traveled in search of a homestead:

“I doubt if the Garden of Eden was more beautiful than was Antelope county
before it was desecrated by man. I do not see how the Garden of Eden
could have surpassed Antelope county in beauty, for God created both, and no
doubt pronounced them both good. The results were different—in the
first case God drove man out of the garden—in the second case man drove out
or marred many of the beautiful things that were found in Antelope county.
He has driven out the elk, the deer, the antelope, the wild turkey, the
curlew, the otter and the beaver. He has ruined the prairie grass and
all the most beautiful of the wild flowers; but let him be given credit for
what he has done in compensation. He has planted orchards and has
dotted the county all over with thousands of acres of planted groves, which
has partly changed the face of the country from that of native prairie to
one of diversified prairie and timber, and by his railroads, telephones and
telegraphs has made communication easy with the rest of the world. If
a strike occurs in the morning in the coal mines of Wales, or if the emperor
of China abdicates his throne, or if there is an earthquake in Italy, we
read of it in the evening papers. Therefore, it may be that things are
about evened up after all.”

By the end of this paragraph, Leach appears to convince himself that the loss of wildlife may be just an unavoidable hurdle in the path of progress. Amazing to think that 100 years ago, people were marveling at the speed at which information travels!


But, Leach takes up a very Leopold-like (writing 35 years before Aldo took his trip down memory lane across the growth rings of the Oak) style as he recounts what exactly happened to some species in Antelope County:

Leach lists several other bird species that had increased, held their own, or were new to his area. In doing so, he makes a dramatic point that the wildlife in Antelope County had experienced significant turnover within the time of one generation.

These are stories we read, in generality, in textbooks about the American West. But, to read the witness of a single person about a county I know in Nebraska is especially impressive.

Leach's words are like the Oak's growth rings. A testament to the passage of time and the potential for humans to have dramatic impact (positive or negative) on the fellow passengers on the voyage, as Leopold would say.