My Year with Leopold: January

As with all great projects, this one starts by being already behind. So, we'll try to catch up with a posting in March about my adventure in February to fulfill my January portion of the project...

Aldo Leopold begins, appropriately (!), "A Sand County Almanac" with "January". The essay is entitled "January Thaw" and it describes a hike over Leopold's property in Sand County, Wisconsin. The theme of the essay is deduction and hypothesis development--Leopold spots several signs of animals (tracks, dive-bombing hawks, darting mice), and he makes predictions about what is going on in their lives on this warm winter day.

I use this chapter in my senior-level capstone course to discuss the art and science of hypothesis development and the scientific method. Good stuff.

One of my favorite sections in the essay happens after Leopold bumps into a meadow mouse, who darts quickly away. Leopold suggests the mouse is...

"...grieved about the thaw. Today his maze of secret tunnels, laboriously chewed through the matted grass under the snow, are tunnels no more, but only paths exposed to public view and ridicule. Indeed, the thawing sun has mocked the basic premises of the microtine [Microtus is the genus name for 'voles'] economic system!"

As I blogged earlier, I participated in a student workshop at a TNC property near Wood River, NE. We had just experienced a February thaw, but winter had descended upon the prairie for at least another day.

I took a quick walk around a prairie to hide some radio-telemetry transmitters for an activity that afternoon, and I was amazed at the number of trails cut through the prairie by big and small animals. Although I hadn't planned it, the above passage in Leopold popped into my head. It was pretty obvious where these little highways had been, and were now exposed. Ironically, the snow was beginning to fall, and it would soon cover the mouse-highways up, again---along with the transmitters and little blue flags that I planted for our students! Doh!

It was darn windy out on the plains, and the snow was smacking me in the eyes. I found it pretty easy to think about how vegetation and snow cover would make for important habitat for creatures that don't have toasty, brick houses with heaters waiting for them.

I plopped down on my chest to try to get a mouse-level perspective of the prairie. Is this a safe haven for a mouse? I heard something rustle under the grass...so, I like to think so. I'd give anything for a 'snorkle-cam' with infrared light source to see the world beneath this matt of grass. 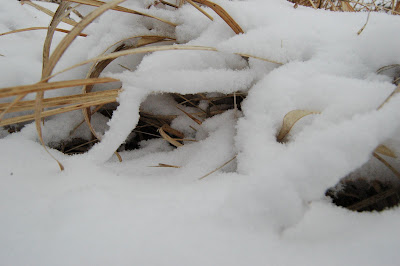 To emphasize how snow can protect mice, here's a most hilarious (and illustrative) video of a red fox in Yellowstone National Park, hunting mice under the snow. The snow does a pretty good job of hiding most of the mice. Luckily for the fox, it doesn't hide all of the mice! Watch the fox tilt its head...triangulating on the sounds.

It's fairly clear to me that I probably miss 95% of what is going on in a prairie (or a forest, or a wetland) when I walk through it. Leopold's lesson for January seems to be to keep your eyes and ears open. Too bad I can't hear as well as a fox!

My Year with Leopold is a blogging project in which I'm forcing myself to read a chapter of "A Sand County Almanac" each month, and find a way to experience one of the themes in my own way. I'll share my experiences during the year. Play along if you want to. Send comments or links to your own blog!

Thanks to Chris Helzer for reminding me about diving fox videos!

Posted by Larkin Powell at 6:38 PM