February's weather in Nebraska has a flirtatious nature. Warm and enticing one moment, and icy and cold the next. 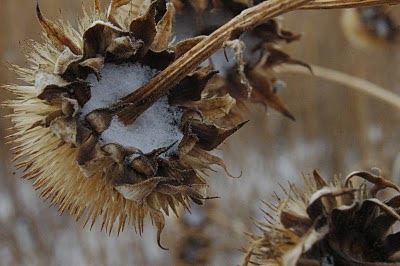 The prairie just sits there, through it all, waiting for periods of warm weather that are long enough to start seeds germinating.
.

I was out in the Platte River valley for a workshop on Friday...not the greatest day for taking photos, in terms of light and contrasts. But, it was a good day to catch some animals that had been snookered by Mother Nature, with the allure of temperatures in the 70's just a week ago. All of these photos were taken during a snow storm, which added the final, emphatic touch to a cold, windy day: winter has not left the Plains.

These geese and ducks were huddled down in mixed flocks, out of the winds along the Platte, which had thawed the previous week. 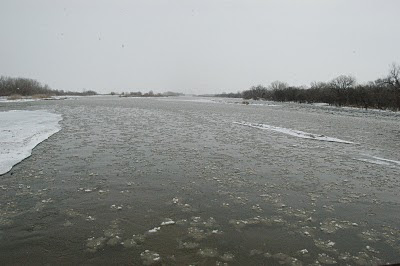 Chunks of ice were flowing in the Platte. Surely this is not ideal conditions for Sandhill cranes that are wanting to roost, at night, in the river. 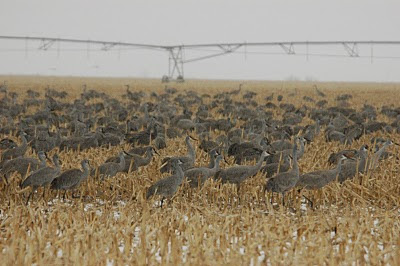 These cranes were gathering and feeding in a corn field as the day ended. Perhaps they'll stay here, instead of going to the ice-filled river to roost. 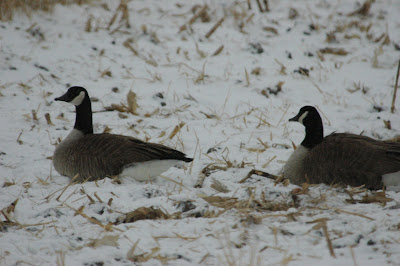 These Canada geese appeared ready to spend the night, nestled among cornstalks. 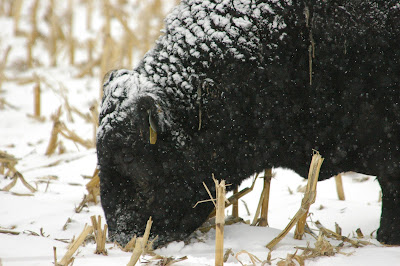 Angus bull in a cornfield along the Platte River near Doniphan, NE. I love this picture. It's easy to pretend it's a bison rooting on the prairie during a snow storm.

Keep warm everyone---surely spring will be back soon.
Posted by Larkin Powell at 9:54 AM