Looking at our own mortality 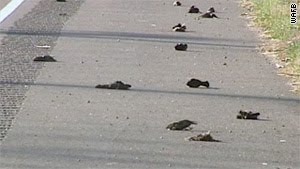 The recent rash of mass bird deaths prompted one "ALE" reader to ask me to comment. For those who have not heard, several hundred blackbirds fell to the ground in Arkansas, and officials seem to have determined that the flock's flight through New Years fireworks is to blame--rather than any disease or other option.

Similarly, there were mass fish die-offs in the Chesapeake Bay and Vietnam, as well as crabs in Britain. People are calling the rash of die-offs, "AFLOCKALYPSE"!

Seth Borenstein of the AP wrote a nice article, which appeared in our Lincoln Journal Star this morning. He documents that these mass deaths are a regular occurrence. Apparently, even Glenn Beck believe there is no reason for mass hysteria.

If you want to see where mass die-offs of animals occur, you can link to this Google map. Make a poster for your wall, perhaps!

However, I think it is interesting to think about why "WE" react (as humans) to news of such events. Why do we care if 5000 blackbirds fall from the sky?

Well, it should be fairly well ingrained in our behavior to wonder if the mass deaths mean that we might be next. Concerns from certain diseases that animals pass to humans are certainly worth our concern, in some rational manner.

And, for the portion of the human population that has trouble sleeping at night, we might also be concerned whether 'we' are doing something to cause these deaths. The deaths of vultures in India have caused the country to ban a drug, Diclofenac, that was being used as a livestock treatment. The vultures ingested the drug when they ate carcasses containing the drug, which is toxic to vultures. So, it's not a bad idea to think about these mass deaths.

The most interesting reason for our 'gut reaction' to these mass deaths may be a little more psychological and personal. Throughout our evolutionary history, humans have small numbers of offspring, with long generation times, and fairly low mortality rates---relative to the rest of the animal Kingdom. Thus, our reaction to mortality events is fairly sensitive. Crabs, blackbirds, and fish are at the opposite end of the spectrum---they have tens, or hundreds, or thousands of offspring, and they have relatively high mortality rates.

So, their populations are not as sensitive to mass death events. But, we look through the lens of our own mortality. And, armed with cell phones and the internet, we start to see mortality around the world...not just around us, locally.

I study mortality in birds...so perhaps I am a bit jaded. When we hire new technicians to work on our projects, single mortality events are much more shocking to them. By season's end, they have perspective. One-third of all female prairie chickens will die between breeding on the lek site in March/April and their nesting attempt in May. Two thirds of all songbird nests fail (no fledglings). Up to 95% of duck nests fail (no ducklings).

Nature is red in tooth and claw, as someone once said.