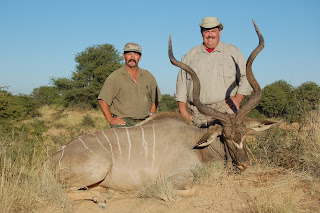 Today was a 'discussion day' in my Wildlife Ecology and Management class. The topic was the Public Trust Doctrine, which is a principle which states that some natural resources should be reserved for public use, and that our government is charged with managing those resources.
State and federal governments share a role in management. States are responsible for managing wildlife, but the federal government steps in with regard to migratory species (they cross state boundaries), endangered species (coordinating responses), and interstate commerce.
As I've blogged before, one very tricky issue is the role of outfitters in states, with regard to interstate commerce. Outfitters often argue that states should not be able to regulate their activity, because they are engaging in interstate commerce---bringing hunting and fishing clients from other states. State residents get upset if outfitters and their out-of-state clients get special privileges. It's a grey area in the public trust doctrine, for sure.
So, it makes for great discussion material...and I had arranged a class discussion on outfitters in Nebraska.
Then, some of my colleagues informed me that Senator Avery, from Lincoln, had introduced a new bill in the Legislature...just this week. LB442 would require all outfitters to be registered with the Nebraska Game and Parks Commission, as well as paying a fee for that status.
What perfect timing---a great addition to our discussion today! Sometimes, we teachers get lucky.
It will be interesting to follow this bill. If successful, it will end the days of small-time outfitters. Paying $1000 in an annual fee will take away most of their profits. Big-time outfitters may be able to afford that fee, but it's a dent in profits. Their charges to clients will probably go up.
However, that may be the price of doing business. Other businesses have to pay fees to operate. I've never used an outfitter in the US, but as the photo above attests, I have paid for hunts in southern Africa. They were not cheap, but Uwe and Claude (pictured with my kudu) were worth every penny. Also, the Namibian guides are regulated by a in-country Professional Hunters Association who charges fees and makes guides pass a test before certifying them. These guides help make ecotourism Namibia's second-largest segment of its economy!
Many US and Nebraskan landowners, smelling potential for profits, have started charging for access to land. "Want to hunt on my land? It will cost you $50/day." As one of my colleagues rightly points out---most of those landowners rarely report those fees to the IRS. These fees aggravate many in-state hunters, who point out they are having to pay to access wildlife that, by definition, is their property---along with the landowner. It is possible that this bill, as defined, may end that practice.
How will current decisions impact access to the wildlife that we, as Nebraskans, collectively 'own'? Stay tuned.
Posted by Larkin Powell at 5:20 PM