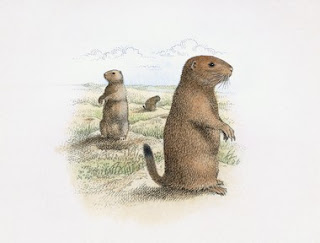 As Lewis and Clark were leaving Nebraska (Boyd County) in 1804, they discovered the species which became known as 'prairie dogs' . The story is that they were so taken with prairie dogs, that they shipped a live one to President Jefferson.
Since then, prairie dogs have taken it in the shorts, as many ranchers view their large 'towns' as competition for grazing animals. If you want to start an argument in ranch country, just mention prairie dogs. Neighbors fight about them...afraid their towns will spread onto adjoining land.
A few years ago, the Nebraska Game and Parks Commission made national news when they passed a resolution that forbade any of their biologists to work with prairie dogs, including participation in a regional Prairie Dog Management Plan with surrounding states. At their next meeting, they were forced to recind their vote after they were reminded that the state wildlife management agency was tasked, under the Public Trust Doctrine, with managing all wildlife for the good of the people in the state--they could not adopt a policy to 'not manage'.
Since that time, the "good of the people" has mostly been interpretted to be a 'hands off' policy, with most decisions going in the favor of landowners who wanted to restrict or reduce prairie dogs' range in Nebraska.
All of this makes yesterday's announcement from the Commissioners more interesting. The Commissioners voted to approve the transfer of 100 prairie dogs from Fort Niobrara National Wildlife Refuge (near Valentine, NE) to the Hutton Niobrara Ranch Wildlife Sanctuary in Rock County.
The Hutton Sanctuary's request had been turned down, previously--with the Commissioners siding with neighbors who were concerned about prairie dogs spreading to their land. Why the change? Not sure, but ALE is on the case.
In the meantime, 100 prairie dogs have a new home along the Niobrara River corridor. Are the winds changing with regard to prairie dog policy in Nebraska? Probably not dramatically, but this does represent a change from policy that I've seen since coming to the state in 2001.
-----------
From Lewis and Clark's journals (Clark writing):
Friday, September 7, 1804
"Discovered a Village of Small animals that burrow in the grown (those animals are Called by the french Petite Chien) Killed one and Caught one a live by poreing a great quantity of Water in his hole we attempted to dig to the beds of one of those animals, after digging 6 feet [1.8 meters], found by running a pole down that we were not half way to his Lodge... The Village of those animals Covd. about 4 acres [1.6 hectares] of Ground on a gradual decent of a hill and Contains great numbers of holes on the top of which those little animals Set erect, make a Whistleing noise and whin allarmed Step into their hole. we por’d into one of those holes 5 barrels of Water without filling it. Those Animals are about the Size of a Small Squ[ir]rel... except the ears which is Shorter, his tail like a ground squirel which they shake & whistle when allarmd. the toe nails long, they have fine fur."
*Image from a National Geographic website. Illustration by Gerald Rapp & Cullen Inc./Laszlo Kubinyi.
Posted by Larkin Powell at 7:38 AM